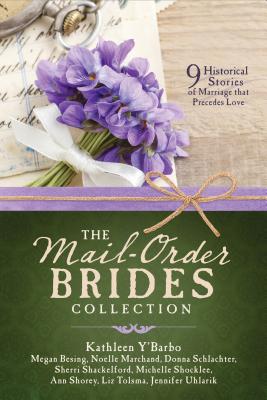 
Email or call for price
What kind of woman would answer an advertisement and marry a stranger?

Escape into the history of the American West along with nine couples whose relationships begin with advertisements for mail-order brides. Placing their dreams for new beginnings in the hands of a stranger, will each bride be disappointed, or will some find true love?

Perfect for the Preacher by Megan Besing
1897, Indiana
Fresh from seminary, Amos Lowry believes marriage will prove to his skeptical congregation that he’s mature. If only his mail-order bride wasn’t an ex-saloon girl, and worse, pregnant.

The Outlaw’s Inconvenient Bride by Noelle Marchand
1881, Wyoming
After a gang of outlaws uses a mail-order bride advertisement to trick an innocent woman into servitude, an undercover lawman must claim the bride—even if it puts his mission in jeopardy.

Train Ride to Heartbreak by Donna Schlachter
1895, Train to California
John Stewart needs a wife. Mary Johannson needs a home. On her way west, Mary falls in love with another. Now both must choose between commitment and true love.

Mail-Order Proxy by Sherri Shackelford
1885, Montana
A mail-order marriage by proxy goes wrong when a clerical error leads to the proxies actually being married instead of the siblings they were standing in for. In their quest to correct the mistake, the two discover outlaws, adventure, and even love.

To Heal Thy Heart by Michelle Shocklee
1866, New Mexico
When Phoebe Wagner answers a mail-order bride ad that states Confederate widows need not apply, she worries what Dr. Luke Preston will do when he learns her fiancé died wearing gray.

Miss-Delivered Mail by Ann Shorey
1884, Washington
Helena Erickson impulsively decides to take advantage of her brother’s deception and travels to Washington Territory in response to a proposal of marriage intended for someone else. How will Daniel McNabb respond when Helena is nothing like he expected?

A Fairy-Tale Bride by Liz Tolsma
1867, Texas
Nora Green doesn’t feel much like Cinderella when her mail-order groom stands her up. But could the mysterious jester from the town’s play be her Prince Charming?

The Brigand and the Bride by Jennifer Uhlarik
1876, Arizona
Jolie Hilliard weds a stranger to flee her outlaw family but discovers her groom is an escaped prisoner. Will she ever find happiness on the right side of the law?

Megan Besing adores reading, writing, and reviewing stories with happily-ever-afters. Her own writing has received many awards, including being a multi-category finalist in ACFW’s Genesis and a winner of MCRW’s Melody of Love contest. She lives in Indiana with her husband and their children where she dreams of the beach and drinks way too many Vanilla Cokes. Connect with Megan at www.meganbesing.com.


Donna Schlachter lives in Colorado, where the Wild West still lives. She travels extensively for research, choosing her locations based on local stories told by local people. She is a member of American Christian Fiction Writers and Sisters in Crime, and facilitates a local critique group. One of her favorite activities is planning her next road trip with hubby Patrick along as chauffeur and photographer. Donna has published 12 books under her own name and that of her alter ego, Leeann Betts, and she has ghostwritten five books. You can follow her at www.HiStoryThruTheAges.wordpress.com and on Facebook at www.fb.me/DonnaSchlachterAuthor or Twitter at www.Twitter.com/DonnaSchlachter

Since her debut in 2011, Sherri Shackelford has become a highly acclaimed author of nine novels published with Love Inspired Historical. Her debut novel was a finalist in the ACFW Genesis Awards. Her books have earned a Readers’ Choice nomination from Romantic Times Magazine, as well as placing in the National Readers’ Choice Awards. She’s a member of Romance Writers of America and the Faith, Hope and Love Chapter. A wife and mother of three, Sherri’s hobbies include collecting mismatched socks, discovering new ways to avoid cleaning, and standing in the middle of the room while thinking, “Why did I just come in here?” A reformed pessimist and recent hopeful romantic, Sherri has a passion for writing. Her books are fun and fast-paced, with plenty of heart and soul.

Michelle Shocklee is the author of The Planter's Daughter and The Widow of Rose Hill, the first two books in the historical romance series The Women of Rose Hill. She has stories in numerous Chicken Soup for the Soul books and writes an inspirational blog. With both her sons grown, she and her husband of thirty-plus years enjoy poking around historical sites, museums, and antique stores near their home in Tennessee. Connect with her at www.MichelleShocklee.com.


Ann Shorey has been a full-time writer for over twenty years. She made her fiction debut with The Edge of Light, Book One in the At Home in Beldon Grove series. Her latest releases include Love’s Sweet Beginning, the third book in the Sisters at Heart series, and several novellas. Ann and her husband make their home in southwestern Oregon.

Liz Tolsma is a popular speaker and an editor and the owner of the Write Direction Editing. An almost-native Wisconsinite, she resides in a quiet corner of the state with her husband and their two daughters. Her son proudly serves as a U.S. Marine. They adopted all of their children internationally, and one has special needs. When she gets a few spare minutes, she enjoys reading, relaxing on the front porch, walking, working in her large perennial garden, and camping with her family.

Jennifer Uhlarik discovered the western genre as a preteen, when she swiped the only “horse” book she found on her older brother’s bookshelf. A new love was born. Across the next ten years, she devoured Louis L’Amour westerns and fell in love with the genre. In college at the University of Tampa, she began penning her own story of the Old West. Armed with a BA in writing, she has won five writing competitions and was a finalist in two others. In addition to writing, she has held jobs as a private business owner, a schoolteacher, a marketing director, and her favorite—a full-time homemaker. Jennifer is active in American Christian Fiction Writers and is a lifetime member of the Florida Writers Association. She lives near Tampa, Florida, with her husband, teenage son, and four fur children.

Bestselling author Kathleen Y’Barbo is a multiple Carol Award and RITA nominee of more than eighty novels with almost two million copies in print in the US and abroad. She has been nominated for a Career Achievement Award as well a Reader’s Choice Award and is the winner of the 2014 Inspirational Romance of the Year by Romantic Times magazine. Kathleen is a paralegal, a proud military wife, and a tenth-generation Texan, who recently moved back to cheer on her beloved Texas Aggies. Connect with her through social media at www.kathleenybarbo.com.