Still My Forever: A Novel (Paperback) 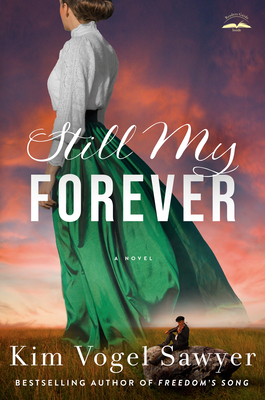 Still My Forever: A Novel (Paperback)


Usually Ships in 1-5 Days
Can a frustrated composer find new inspiration with the woman who once made his heart sing? From the bestselling author of Freedom’s Song comes a charming romance inspired by a real historical figure.

Four years after leaving town to make a name for himself as a composer, Gilbert Baty has returned temporarily to Falke, Kansas. Now, he’s trying to keep everyone from learning the truth about his disastrous years in New York City. He hopes to start writing music again in Falke, but he can’t help being distracted by Ava Flaming, the brown-eyed baker to whom he was briefly engaged before he ended things—and who still stirs feelings in him he knows he has no right to pursue.

Ava had thought she was past the loss of Gil Baty. But to her dismay, she’s as drawn to him as ever. The situation only gets worse when Gil establishes a youth band in Falke, showing once more what a good man he is.

But when the band has a chance to compete in a statewide competition, Ava faces the prospect of heartbreak again. Could music take Gil away forever this time? Or might God be stirring in Ava’s and Gil’s hearts a new song that will draw them together for good?
Kim Vogel Sawyer is a highly acclaimed, bestselling author with more than 1.5 million books in print in seven different languages. Her titles have earned numerous accolades including the ACFW Carol Award, the Inspirational Readers' Choice Award, and the Gayle Wilson Award of Excellence. Kim lives in central Kansas with her retired military husband, Don, where she continues to write gentle stories of hope. She enjoys spending time with her three daughters and grandchildren.
“Sawyer has done it again with Still My Forever. From the first page until the last, I devoured this story!”—Kathleen Y’Barbo, Publishers Weekly bestselling author of The Black Midnight and Dog Days of Summer

“Still My Forever is a lyrical, heartfelt story of redemption, restoration, and a God who takes all the scattered motifs and melodies of our lives and turns them into a beautiful symphony. Kim Vogel Sawyer beautifully captures the soul of a musician in Gil, and the utterly charming Ava is his perfect match. Their sweet romance; the close-knit Mennonite community of Falke, Kansas; and a cast of memorable supporting characters combine to make Still My Forever one of this year’s absolute must-reads!”—Amanda Wen, Christy Award–nominated author of Roots of Wood and Stone and The Songs That Could Have Been

“I always love getting my hands on a Kim Vogel Sawyer book, and Still My Forever didn’t disappoint. When composer Gilbert Baty returns to Falke, Kansas, he has to face not only his failure in New York but also the woman he loved and left behind. Ava Flaming is still single, but she refuses to let her feelings for Gil get to her. After Gil becomes the local band director and has an opportunity to finish the song of a lifetime—written for the woman he loves—her heart soon follows God’s call. The details of a love story created through music gives this wonderful Mennonite story a strong sense of faith and romance. I’m still humming.”—Lenora Worth, author of The X-Mas Club